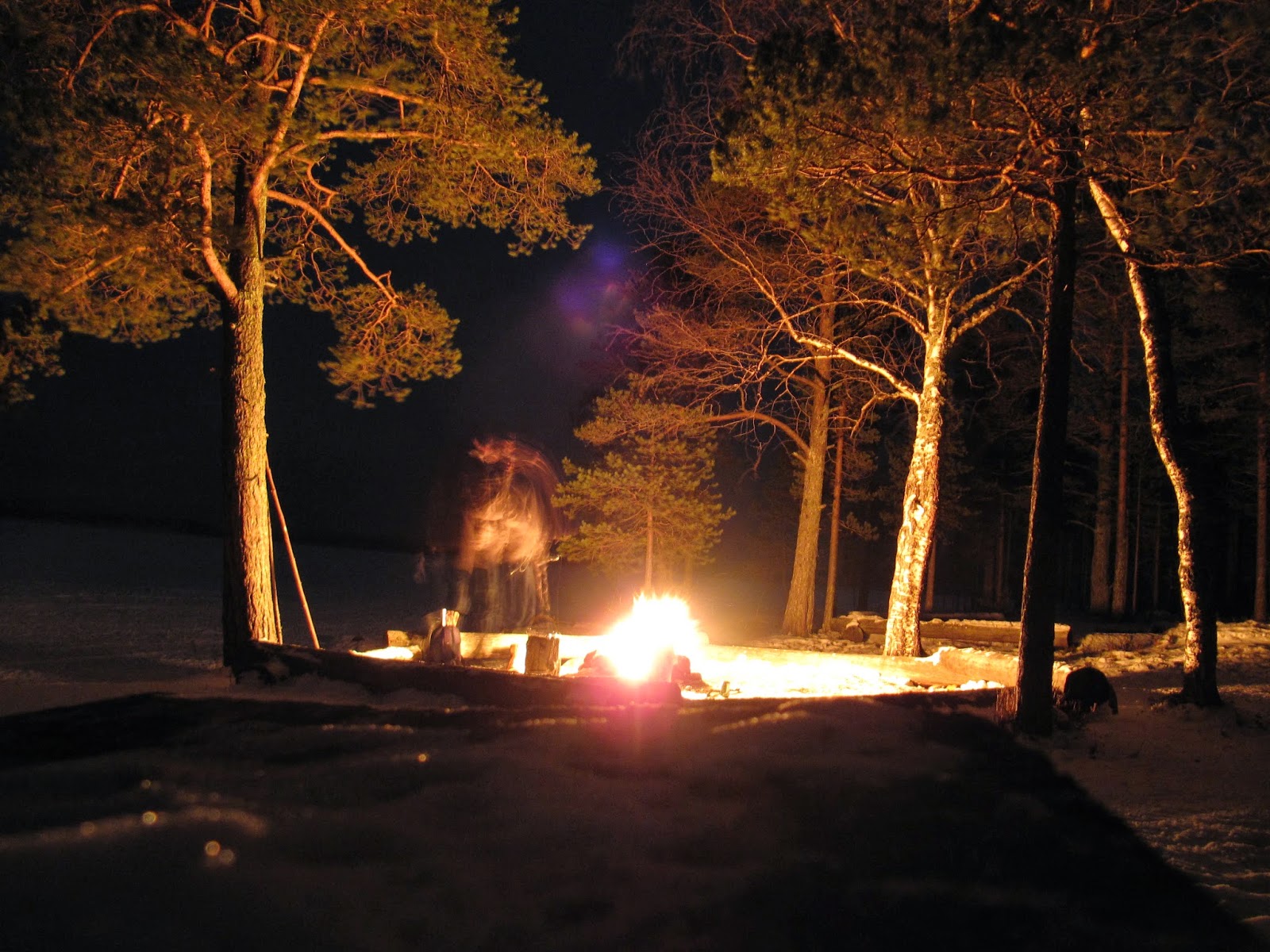 Destination this time: Ivalo – direct flight connection from Helsinki. We picked up our car at the airport, the smallest one ever, but absolutely enough for cruising around a bit. We went to the … lake, made a fire and grilled some sausages. Waiting the sky to get clear, but it wasn’t supposed to happen that night, unfortunately. 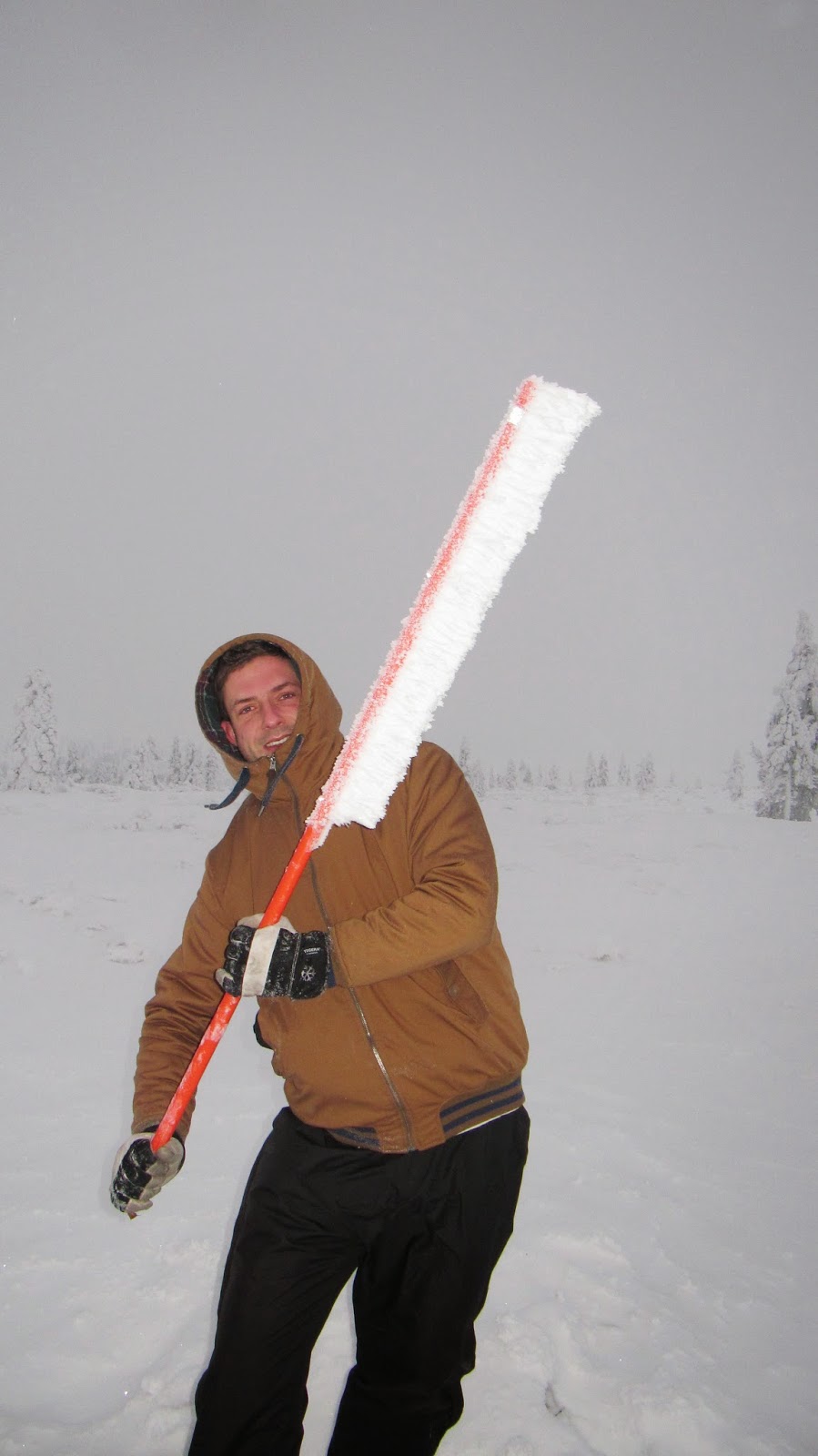 The next morning Torsten and me were going to the Urho Kekkonen National Park. It was stormy and foggy, almost nothing to see. We tried to walk up the Kiilopää mountain, but found ourselves surrounded in clouds soon. It hasn’t made so much sense to walk further. We picked up Frenky and his family from the airport instead, booked a tour for the next day and tried the Lapland sauna in the evening. There was one Finnish guy, we called him “fire fighter”, who was sitting right next to the oven putting water on it continuously. I don’t know how the oven could still be heating up the room, because the water was just running through. But somehow it did, the temperature must have been more than 100°C. And if someone was leaving (or coming) he was already asking for the next bucket of water. Amazing, that guy. We’ve met some Norwegians also. They’ve been on the way through, enjoying the beers for “moderate prices”, they said. Moderate prices? Aha!!! We just looked at each other, shaking our heads. (A beer in Finland still costs something about 6 €!)

The snow mobile tour was fun. Speeding across Finland’s largest lake, lake Inari. Not as fast as possible, and under continuous surveillance of your guide, but still a fun thing. We grabbed some cookies and tea in cottage, and Pekka told us everything we wanted to know and showed us his latest polar light pictures. He was able to take some wonderful shots. I will try to take one myself the next time again. We finished off the day, as usual, with some drinks in the sauna. 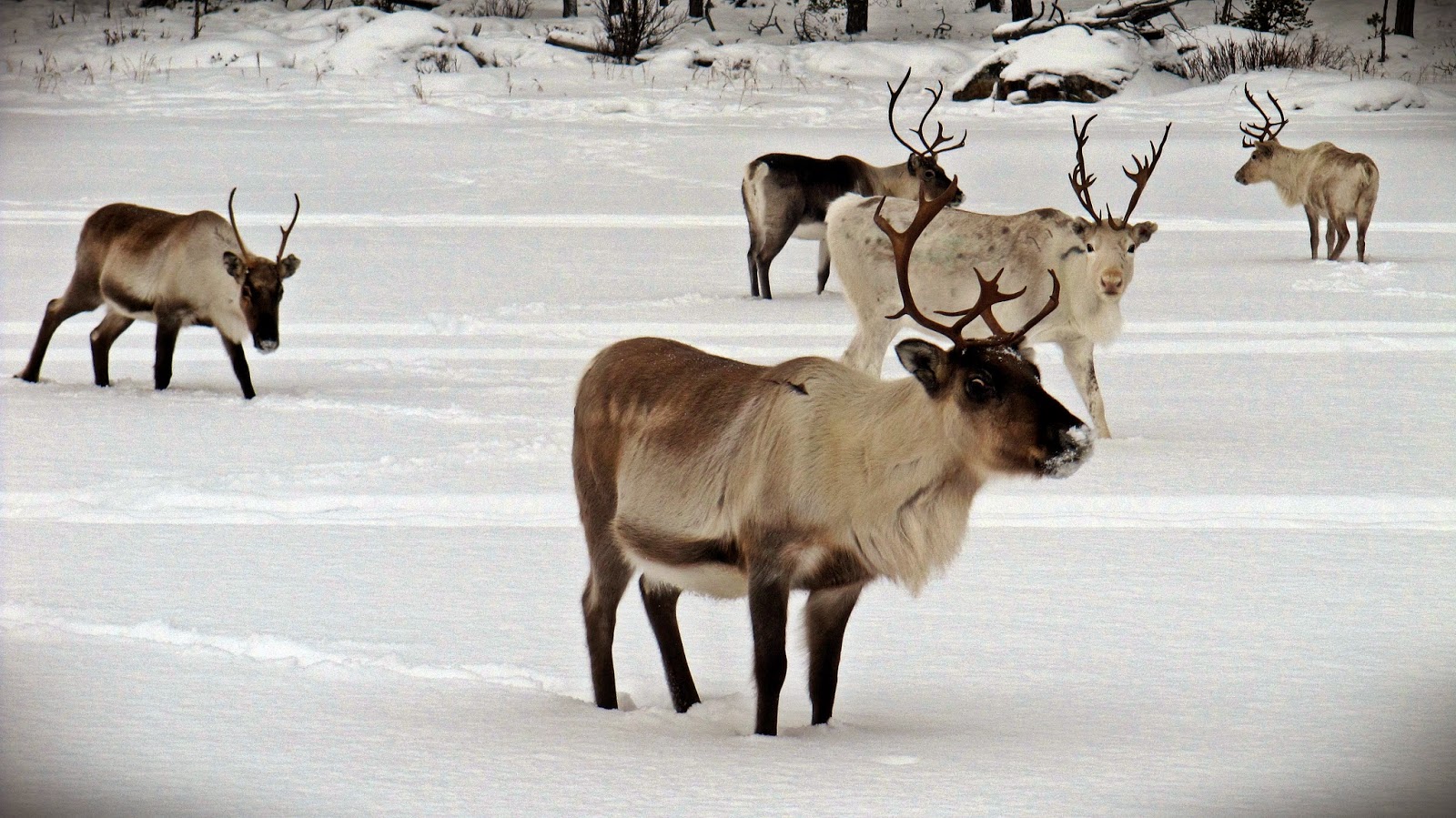 Monday, hiking day. Destination: Lemonjoki (= river of love) Nationalpark. Civilization ain’t existing there anymore, some 50 km southwest of Inari. Just some cottages – people hardly to be seen. After a couple of left and right turns, we weren’t able to locate our position on the map, lost, in the middle of nowhere, no sign leading us to the P which was printed in shiny blue colour on the leaflet. Finally, we found a cottage having its lights on. We parked the car and started to look around. Suddenly, a man showed up, dressed with a kinda coat, mainly in red and blue. He was wearing slippers made of reindeer fur, the top twisted and curled like some men do with their long grown moustache. Communication was more than difficult. I didn’t get a word of his Sami-Finnish and he, himself, doesn’t speak English at all. But his wife did, luckily. After explaining our plans, she disappeared and came back after some moments, carried a few maps, widened them on the table. The car park we were looking for ain’t accessible during winter, and the track we wanted to take was used by snowmobiles every now and then, maybe once a week, as it seems. Though, we started slightly demotivated. And it was a torture, not as relaxing as it was supposed to be. Our feet were sinking in soft snow, as far as 50 cm, knee-deep. But we reached the tent with a fireplace in the middle. Thanks god, warming up a bit and having freshly made mustamakkara (blood sausage) with puolukka hillo (lingonberry marmalade). We headed back as it was getting dark. 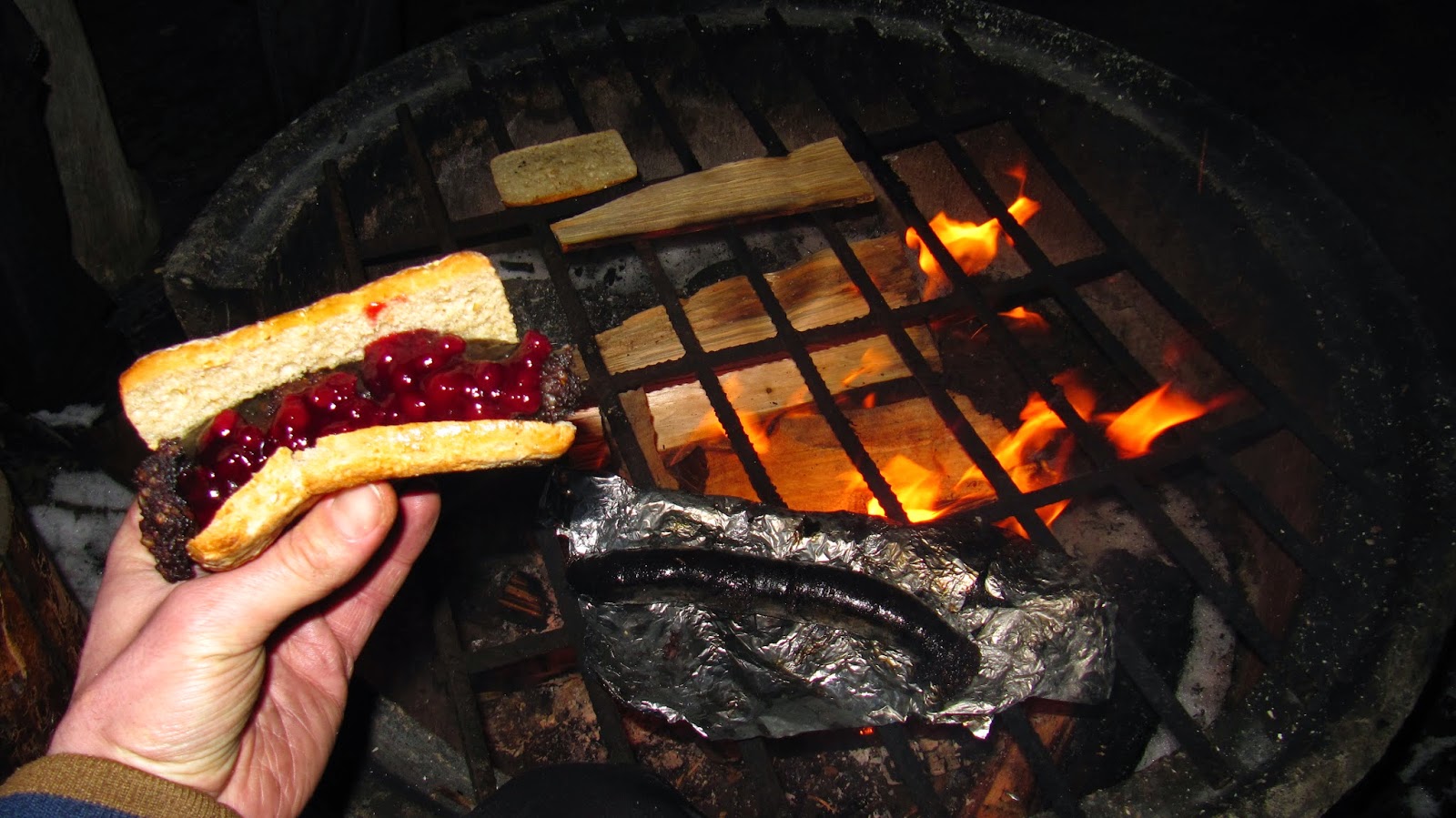 Time to go to the airport. Time’s up! Last chance to see those polar lights. It was simply to clouded (and warm) and all possibilities vanished. But from the aircraft, above all clouds, aurora borealis guaranteed. Frenky, Torsten and I, each of us sitting at a separate window, were prepared perfectly, hidden under a jacket to prevent any light to cause reflections at the glass. We waited, and nothing happened, nothing spectacular at least. There was something, hardly visible, and I told myself that can’t be it. I took the camera, highest possible sensitivity, shutter speed 15 seconds. I tried to hold it calmly to avoid blurring of pictures. And there it really was – a green shire across the horizon. Damn, all those pictures in the internet and brochures – all fake. It’s just not as bright as shown there. If you don’t look for it, you wouldn’t even recognize it’s there! Obviously, you must be really lucky to see it clearly. But I’ll try again someday! 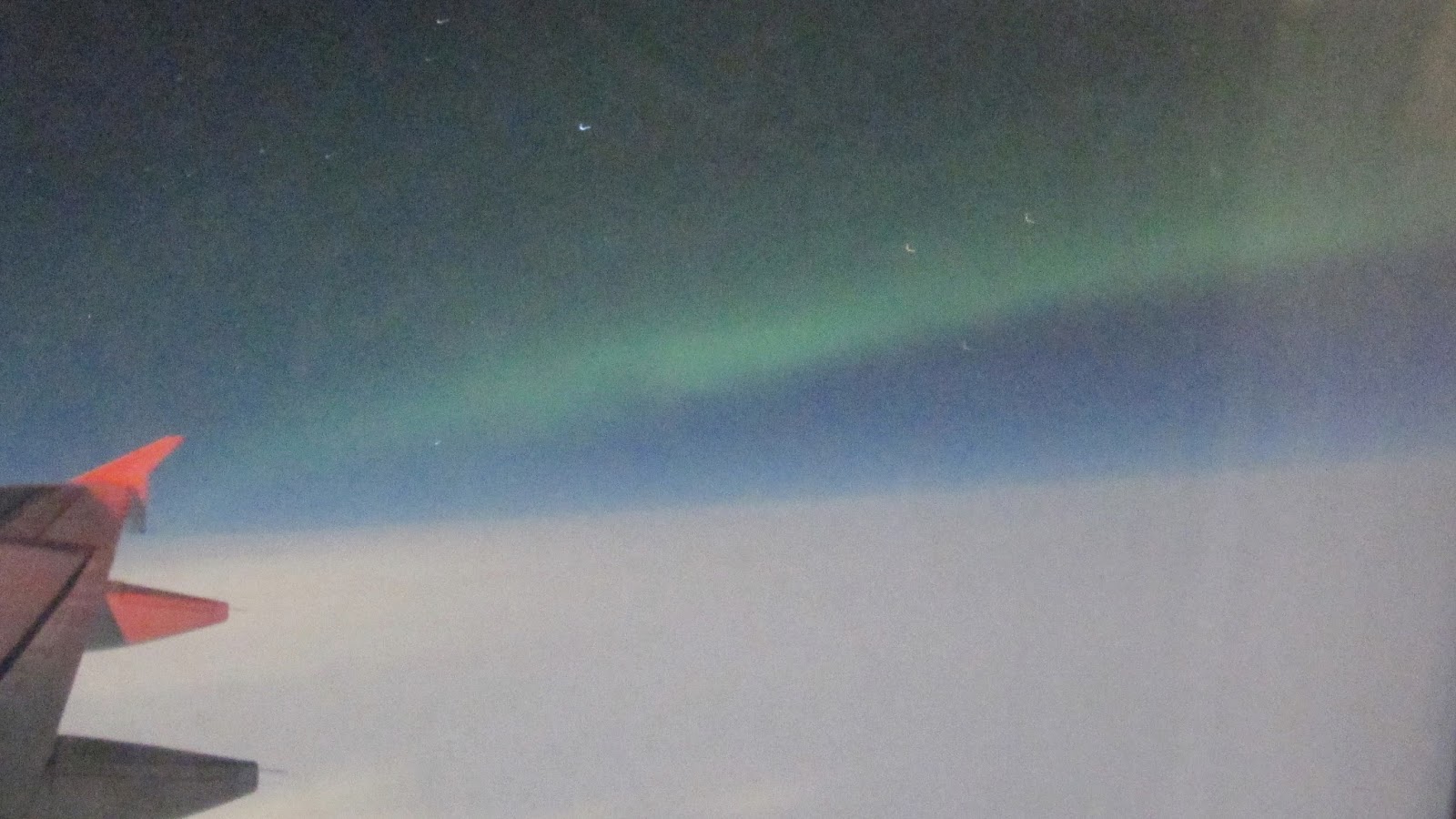